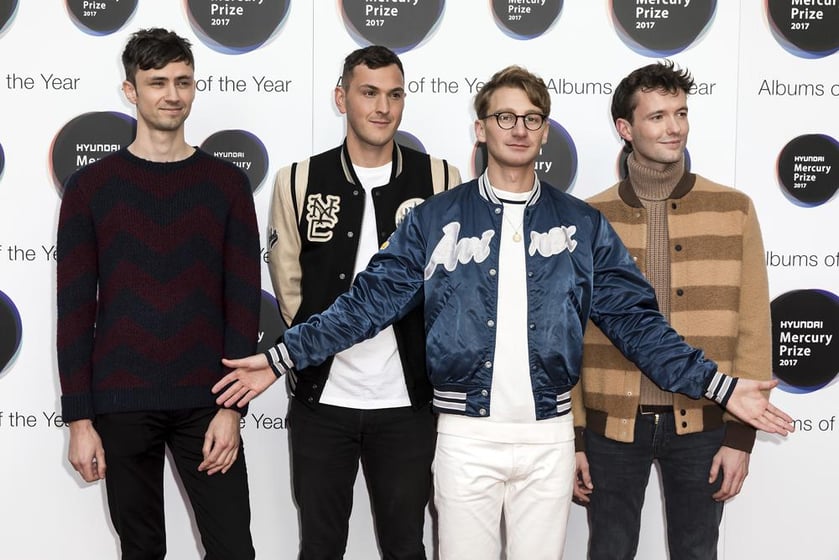 NEW YORK (AP) — Hospitals aren’t usually incubators of great music, but in the case of English indie-pop band Glass Animals, one member’s medical emergency led to a breakout album and a Grammy nomination.

Drummer Joe Seaward was struck by a truck in 2018 while riding his bike in Dublin, leaving him fighting for his life. Dave Bayley, the quartet’s songwriter, singer and producer, spent long hours next to his friend in the hospital, the future uncertain under the harsh florescent lights.

“Hospitals are weird places, and I think because of that, they make you feel very nostalgic. You’re looking for comfort in the past. So that was the kind of beginnings of the album,” Bayley says. “I started writing down these memories and searching for more memories, and some of them were great. Some of them are really uncomfortable.”

The album that emerged was the deeply personal “Dreamland,” rooted in Bailey’s past. There are playfully references to Scooby-Doo, Fruit Loops, Pepsi Blue and Mr. Miyagi, but also a song about domestic abuse (“Domestic Bliss”) and a tune about an old friend who planned but never pulled off a school shooting (“Space Ghost Coast to Coast”).

The standout single is “Heat Waves,” a hypnotic, hazy tune that honors a departed friend whose birthday brings grief each passing June. It was a slow-moving hit, reaching the top 10 of Billboard‘s Hot 100 after 42 weeks on the chart, the longest climb to the top 10 in U.S. chart history. The song has earned over 1 billion streams on Spotify, landing it in the company of “Levitating” by Dua Lipa and “Dynamite” by BTS.

“‘Dreamland’ was made before we ever knew about COVID-19, but it was born in period of personal turbulence for Dave and the band — in the wake of Joe’s accident,” says Amy Morgan, the band’s manager.

“‘Heat Waves,’ for example, is a very personal love song about loss, but it connected because I think it captures a very universal sense of loss — which is at the forefront of all of our hearts at the moment, sadly.”

Glass Animals also snagged a Grammy Award nomination for best new artist, even if that’s a little curious for a band whose debut album came out in 2014. Later this month, they’ll compete against the likes of Olivia Rodrigo, Saweetie, Finneas, Japanese Breakfast, The Kid Laroi and Arlo Parks. The band has also bagged two Brit Award nominations.

Bayley believes some of the success of the album is due to the pandemic. Finding the future bleak, many listeners looked for comfort in the past — like he had done back in the hospital.

“They were in a similar position to the position that I was in when I wrote a lot of this record,” he says. “Everyone was stuck inside. They were listening to the music they grew up with. They were eating the food that they grew up with it. They were seeking comfort in those situations and reliving these memories because they can’t be out creating new ones as well.”

The confessional roots of “Dreamland” were actually sown on the band’s last album, “How to Be a Human Being,” which saw Bailey write each song from the perspective of someone else. The last one, “Agnes,” was about a friend of the band who died by suicide. It was Bayley’s most personal song and marked a change in his songwriting.

He didn’t want to put it on the album. He played it for the rest of the band, who quickly insisted it be on the album. Fans later wrote letters saying how much the song meant to them and that gave Bayley courage to turn more inward.

“That response gave me a lot of confidence to write more personal things,” he says. “The songs that have meant the most to me by my favorite writers is when they speak about something personal and it makes you feel less alone.”

With the songs done, there was something missing — “a bit of a glue,” he says. Bayley looked for something that tied it all together and realized it was his mother. He had recently digitized old camcorder tapes she had made when he and his brother were kids and he layered some of her narrations into interludes on the album, making “Dreamland” all the more personal.

He also added some subliminal messages for hard-core fans — there’s something in Morse Code in the middle of the vinyl record, another message that can be heard on another track if you reverse it. The album was finally done, but the pandemic wiped out the band’s plans for touring.

“We had to completely rethink everything. And in a way, it kind of made us really open-minded,” says Bailey. “No one during the Spanish flu left a handbook of how to release an album in a pandemic.”

With the blessing of their record label, Glass Animals started giving the album away — literally. They launched an open source website where fans could download each section of the songs and artwork. They invited remixes and saw their music adopted for TikTok videos and by Minecrafters. Fan fiction and art submissions inspired by “Dreamland” poured in.

“I would wake up every morning and be excited to look at what was coming in. That was my petrol,” says Bailey. “I was kind of like, ‘We don’t know what to do. This is helping me. Maybe it’ll help some other people.’”

Avery Lipman, president, co-founder and chief operating officer of Republic Records, credited the band, their labels and their representatives for being flexible and innovative. “Glass Animals have defied gravity in historic fashion,” he says.