A jury of eight women and four men was seated Wednesday in the trial of a Republican congressman from Nebraska who’s accused of lying to federal authorities about illegal campaign contributions from a Nigerian billionaire.
Thursday, March 17th 2022, 6:58 AM CDT
By Associated Press 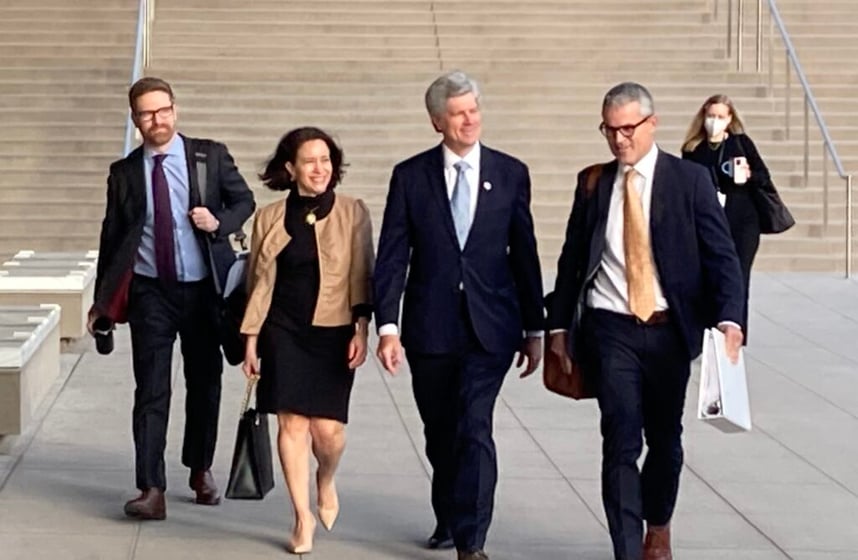 LOS ANGELES (AP) — A jury of eight women and four men was seated Wednesday in the trial of a Republican congressman from Nebraska who’s accused of lying to federal authorities about illegal campaign contributions from a Nigerian billionaire.

Opening statements from prosecutors and defense attorneys are scheduled for Thursday in the trial U.S. Rep. Jeff Fortenberry, the first of a sitting member of Congress in 21 years. The case could all but end the political career of a congressman seen as a reliable conservative who coasted to easy wins but isn’t a familiar name outside of Nebraska.

Outside the courtroom, Fortenberry declined comment. He has pleaded not guilty to charges alleging he intentionally misled FBI agents and prosecutors who were investigating a $30,000 donation from businessman Gilbert Chagoury during a 2016 fundraiser in Los Angeles.

Earlier in the day, U.S. District Court Judge Stanley Blumenfeld Jr. closely queried possible jury members about their political attitudes, asking if their beliefs about politicians could make it difficult for them to be impartial in the trial.

Several were dropped from consideration after expressing strong political leanings.

One potential juror, a man who said he was a fire alarm technician, said he had a skeptical view of politicians. “I don’t generally trust the words they say,” he told the judge, but later told him he could put aside those feelings in the case. Another woman who was not selected expressed negative views about Republicans: “I do have a problem with the Republican Party,” she said.

Another woman who was rejected from the panel alluded to a memory problems and said she “smoked a lot of weed” when she was younger.

Fortenberry, who is running for reelection, took a big political hit when prosecutors announced the charges, and his indictment has already divided Nebraska Republicans who backed him for years.

“You have people on both sides,” said Philip Young, a longtime Republican campaign and public relations consultant in Lincoln. “If he’s acquitted, that probably makes the decision tougher for a lot of Republicans. If he’s convicted, it’s much more of an uphill climb for him politically.”

Many prominent Nebraska Republicans have already dumped the nine-term incumbent in favor of a conservative state lawmaker who wants to oust Fortenberry in the party’s May 10 primary.

State Sen. Mike Flood, a former speaker of the Nebraska Legislature, jumped into the race amid concerns that Fortenberry’s indictment could cost the GOP an otherwise safe seat.

The 1st Congressional District runs through a large stretch of rural, eastern Nebraska, but also includes the liberal-leaning city of Lincoln. Nebraska state Sen. Patty Pansing Brooks, a progressive state lawmaker from Lincoln, is likely to win the Democratic nomination for the district.

Prosecutors allege Fortenberry lied about what he knew on two occasions — an interview at his Lincoln home and a follow-up meeting in Washington — and didn’t properly disclose the contribution in his campaign filings.

Fortenberry has argued the prosecution is politically motivated, that he was misled by authorities and that he wasn’t aware that his statements to authorities were untrue. However, the judge overseeing the case has ruled that the congressman’s attorneys can’t argue that the prosecution is political. Fortenberry’s trial is expected to last around four days.

Fortenberry campaign spokesman Chad Kolton claimed prosecutors knew the congressman didn’t know details about the contribution, but directed an informant to feed him the information in a 10-minute phone call “with the intention of trying to prosecute him.”

Kolton argued FBI agents then used false pretenses to interview Fortenberry nearly a year later, and indicted him when he failed to recall all of the details from the phone conversation.

“Jeff Fortenberry has always had great faith in the American people’s ability to judge what is fair and just,” Kolton said. “When the jury hears the facts in this case, they will recognize his innocence.”

Fortenberry was first elected to the House in 2004 after a brief stint on the Lincoln City Council and work as a local publishing executive.

As a congressman, Fortenberry has been a reliably conservative vote and gained attention as an advocate for Yazidis, a persecuted religious minority from Iraq with a large population in Lincoln. He also sponsored a new federal law that promotes research and new treatments for people with amyotrophic lateral sclerosis, also known as ALS and Lou Gehrig’s disease.

Fortenberry’s lawyers have also tried, and failed, to move the trial to Nebraska, where he would likely have gotten a friendlier, Republican-leaning jury. In Democrat-heavy Los Angeles, it’s unlikely jurors will have ever heard Fortenberry’s name.

Kenneth Gross, an election law expert and former associate general counsel of the Federal Election Commission, said criminal cases against sitting members of Congress are rare but that Fortenberry faces a tough challenge.

“The jury pool can make a difference,” Gross said. “Let’s put it this way. There’s a reason they tried hard to move the case.”

Fortenberry could also lose at least part of his congressional pension under federal anti-corruption laws. A conviction would cost him the “creditable service” accrued in office that helps determine the size of his retirement annuity.

A House ethics committee has already created an investigative panel to review the case, as required by House rules, but is deferring any action until after Fortenberry’s trial so it doesn’t interfere with that process.

Members of Congress who violate internal ethics rules can face sanctions ranging from a reprimand letter to being expelled from office, said Brian Svoboda, a Washington attorney who specializes in campaign finance law and House ethics investigations.

Svoboda said expulsions are extraordinarily rare because members usually resign from office before it can happen. Congress has only expelled five of its members in U.S. history. The last expulsion was of Rep. James Traficant in 2002 after the Ohio Democrat was convicted of bribery, corruption, tax evasion and other charges. Traficant represented himself at his trial in 2001.

“Typically, when a member is convicted of a crime, that creates strong momentum toward expulsion,” Svoboda said.

Mike Flood is the founder and an owner of Flood Communications and News Channel Nebraska. All stories about him and any declared candidates in the Nebraska First Congressional District race during the remainder of his campaign and/or ensuing tenure in office have been and will be written by outside media outlets.