Virginia "Ginni" Thomas was born in Omaha, Nebraska, in 1957 and attended the University of Nebraska, Creighton University, a private Jesuit university in Omaha - has renewed accusations of conflict of interest for, husband, SC Justice Clarence Thomas.
Saturday, March 26th 2022, 11:53 AM CDT
By Associated Press 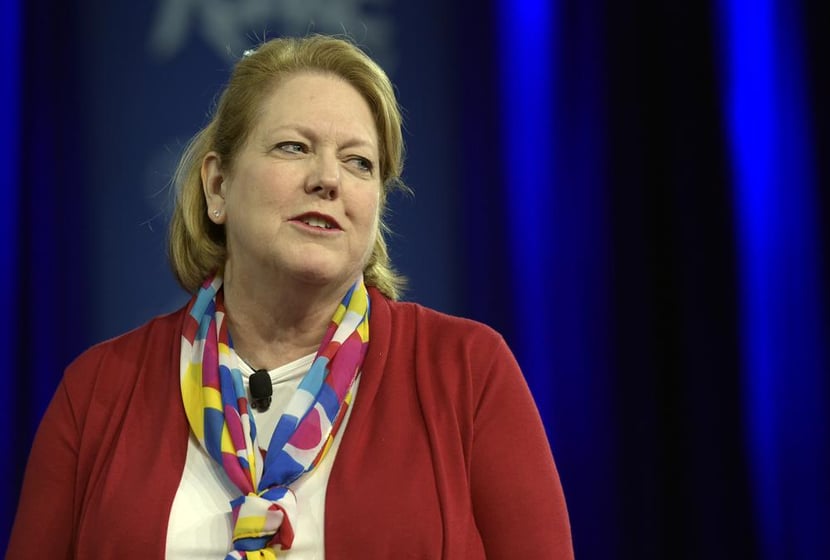 WASHINGTON (AP) — Through a decades-long career in conservative politics, Virginia Thomas has repeatedly maintained that her political activities posed no conflict of interest with the work of her husband, Supreme Court Justice Clarence Thomas.

“Like so many married couples, we share many of the same ideals, principles, and aspirations for America,” Thomas said earlier this month in an interview with the right-wing Washington Free Beacon. “But we have our own separate careers, and our own ideas and opinions too. Clarence doesn’t discuss his work with me, and I don’t involve him in my work.”

Justice Thomas faces renewed accusations of conflict of interest after revelations that his wife repeatedly urged aides to former President Donald Trump to resist the results of the November 2020 presidential election. A series of text messages between Virginia Thomas — known as Ginni — and former White House chief of staff Mark Meadows show her lobbying Meadows to fight the election results and offering strategic advice on how best to overturn President Joe Biden’s victory.

The text exchanges, first reported by The Washington Post and CBS, highlight Thomas’ deep access to the Trump inner circle and her personal involvement in a divisive and destructive fight that many Trump supporters hoped would eventually end up in front of her husband on the Supreme Court.

Trump’s attempts to change the results did eventually make it before the court, which refused to hear a collection of state-level challenges in February 2021. Justice Thomas called the cases an “ideal opportunity” to address an important question whether state lawmakers or state courts get the last word about the manner in which federal elections are carried out. He dissented, calling the ruling not to hear arguments in the case “befuddling” and “inexplicable.”

Now Ginni Thomas’ personal involvement in that fight has fueled calls for Justice Thomas to recuse himself from all cases relating to the Jan. 6, 2021, assault on the U.S. Capitol by a mob of Trump supporters seeking to stop the Senate from certifying the election results.

“Why didn’t Justice Thomas recuse himself in the Trump records case in light of Ginni Thomas’ apparent active involvement?” Sen. Richard Blumenthal, D-Conn, said on Twitter. “The nation deserves an explanation & the Supreme Court needs a Code of Ethics.”

He said that there was “no question that recusal by Justice Thomas is absolutely essential going forward in any case involving the January 6 committee’s investigation & the 2024 presidential election if Trump runs again.”

It’s common for spouses of judges and Supreme Court justices to have their own careers, and those careers often involve the law in the insular, overlapping world of high-level D.C. legal circles. But Ginni Thomas’ career has been deeply steeped in conservative partisan politics.

Her history as a staunch Trump supporter was no secret. Before the November 2020 elections, her Facebook page featured multiple postings that covered a variety of familiar Trump-world topics: allegations of corruption against the Biden family, speculation that billionaire philanthropist George Soros controls the Democratic Party, attacks on the mainstream media, hints that Biden is suffering from dementia and unsupported claims that former President Barack Obama broke the law by spying on Trump and his associates during the transition between their administrations.

Thomas has said in interviews that she attended the initial pro-Trump rally the morning of Jan. 6 but left before Trump spoke and the crowds headed for the Capitol building.

Justice Thomas was the lone dissenting voice when the Supreme Court ruled in January to allow a congressional committee access to presidential diaries, visitor logs, speech drafts and handwritten notes relating to the events of Jan. 6.

Ginni Thomas was born Virginia Lamp in Omaha, Nebraska, in 1957 and attended the University of Nebraska, later earning a law degree from Creighton University, a private Jesuit university in Omaha. Her mother, Marjorie Lamp, was a major figure in local Republican political circles and unsuccessfully ran for Congress in 1972. Ginni Thomas, in her mother’s 2009 obituary, said her mother was “into politics for all the right reasons — for our country.”

Ginni Lamp first came to Washington, D.C., in the early 1980s as an aide to former Nebraska Republican Rep. Hal Daub. She married Clarence Thomas in 1987 and first emerged into the national spotlight as a strong public defender of her husband, who faced accusations of sexual harassment during his 1991 confirmation hearings.

She went on to work with the U.S. Chamber of Commerce and for the Heritage Foundation, a right-wing powerhouse that has played an instrumental role in an unqualified Trump success — stacking the court with conservative judges such as Neil Gorsuch, Brett Kavanaugh and Amy Coney Barrett, who were selected and vetted by the foundation.

She spent several years as a special correspondent for The Daily Caller, contributing articles and videos to the website founded by Fox News host Tucker Carlson. Her last contribution there was in 2018, but the articles feature headlines like, “Dems Are On The ‘Greatest Witch Hunt Since Salem,’ According To Donald Trump Jr.”

Her biography on the Daily Caller website mentions hobbies such as “motor homing” and supporting the University of Nebraska Cornhuskers. It states that Thomas has “maintained her midwestern authenticity after 30 years in Washington, D.C.”

Twelve years ago, she founded her own firm, Liberty Consulting; in her Free Beacon interview, she described her role as “coalition work and bridge-building.”

Thomas defended her openly political work as compatible with her husband’s duties as long as she took no positions on specific cases before the Supreme Court.

“The legal lane is my husband’s — I never much enjoyed reading briefs and judicial opinions anyway and am quite happy to stay out of that lane,” Thomas told the Free Beacon. “We do not discuss cases until opinions are public — and even then, our discussions have always been very general and limited to public information.”