A former national champion at UNO and hall-of-fame coach at Wayne State College is returning to Nebraska to coach the Creighton University softball program.
Monday, June 6th 2022, 10:31 AM CDT
By News Channel Nebraska 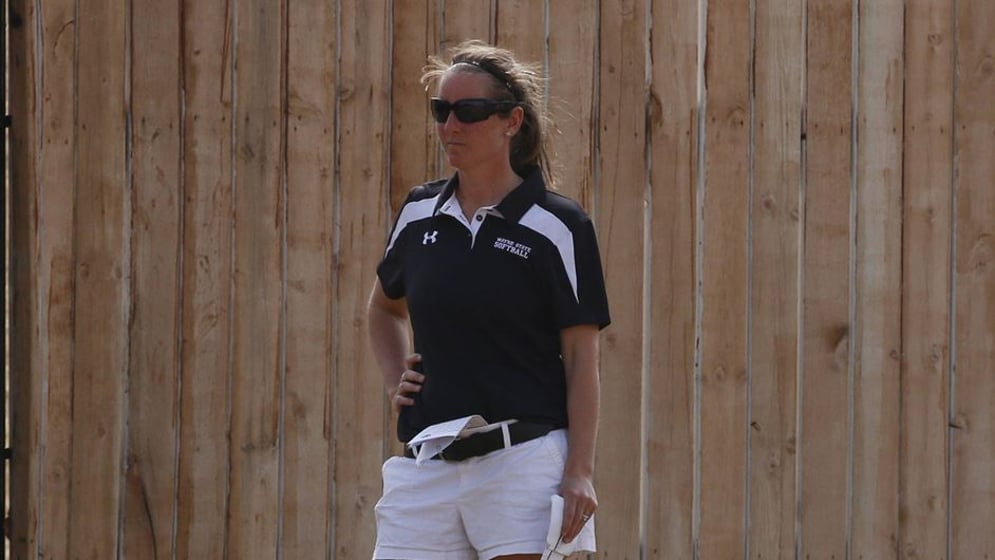 OMAHA, Neb. – A former Wayne State softball coach, and three-time Summit League Coach of the Year, is taking over as the head coach of Creighton University softball.

Creighton Athletic Director Marcus Blossom announced Monday that Krista Wood, who most recently coached at South Dakota State, would be taking the helm of the Bluejays' program, becoming just the third coach in program history. She replaces Brent Vigness, who was at the head of the program for 30 years.
"I'm very excited to welcome Krista, her husband Alex and their two children, Braxton and Myles to the Creighton community," said Blossom. "Krista is a fantastic coach, leader and teammate who has earned a tremendous amount of success as a head coach at two different universities. More importantly, she's a great mentor of young women who also emphasizes the importance of academic success and personal development. Our softball program will thrive under Krista's leadership."

Wood has spent the past eight seasons as head coach at South Dakota State, where she led the Jackrabbits to a 238-164 record and earned Summit League Coach of the Year accolades in 2018, 2021 and 2022. SDSU swept Summit League regular-season and tournament titles in in both 2021 and 2022, picking up NCAA Tournament wins over Stanford (2021) and Villanova (2022) along the way.

"I am fired up to come to Creighton University," said Wood. "I know that Creighton has a strong tradition of excellence not only in softball, but across the entire Bluejay Athletic Department. This is a phenomenal opportunity for me being so close to home and return to an area I am very familiar with. I want to thank Athletic Director Marcus Blossom for putting his trust in me to lead this program."

South Dakota State finished the 2022 season with a 41-13 record, including an 18-2 league mark. The third seed in the Orlando Regional, Wood's club rallied with three runs in the seventh and another in the ninth inning to eliminate BIG EAST champion Villanova from the postseason The Jacks produced a school-record 76 home runs and had a pair of pitchers named First Team All-Summit League. SDSU finished 12-0 at home, one of three teams nationally to finish unbeaten at home in 2022.

SDSU won the 2021 Summit League regular season and tournament titles and advanced to its first NCAA regional appearance at the Division I level in 2021, finishing 43-8. Wood's 2021 squad tied the program's single-season record for wins, including a victory over Stanford in its NCAA Tournament opener. Wood and her staff were one of 10 programs in the nation to be recognized by the National Fastpitch Coaches Association as a 2021 Division I Regional Coaching Staff of the Year.

The Jackrabbits won 20 or more games six times under Wood and reached the Summit League Championships all seven seasons it was held during her tenure.

SDSU won 37 games in both 2018 and 2019 seasons, reaching the National Invitational Softball Championship following each campaign. Wood was named the Summit League's Coach of the Year in 2018 while guiding her team to a program-record .673 winning percentage, breaking the 35-win mark for the second time in history.

Throughout her tenure at SDSU, Wood's teams were at their best against Big East competition. The Jackrabbits were 20-5 overall in those games, including a 17-1 mark in the past six seasons that features an active streak of 11 straight victories.

Wood put together a 270-154 mark at the Division II program, turning the Wildcat program into a winner after inheriting a 10-win squad when she was hired before the 2007 season. She brought WSC to three consecutive NCAA Tournaments between 2009-11, including a 2010 NCAA Central Region crown. The Wildcats won a school-record 43 games during that season and claimed the Northern Sun Intercollegiate Conference tournament championship. She was inducted into Wayne State's Athletic Hall of Fame in 2019.

Wood coached internationally during the summer of 2009, leading a United States team (sponsored by USA Athletes International) at the Oldenzaal Invitational in Holland.

In the 2001 national championship game, Wood authored a two-hit shutout with five strikeouts in a 4-0 win over Lewis University. She also ranks second in career shutouts at UNO with 43, and earned numerous honors as a player at UNO, earning First Team All-NCC honors three times, while also collecting three All-NCC Academic Team awards. She earned NFCA All-Region First Team honors in 2002 and was a Second Team All-Region selection in 2001. Wood also earned North Central Conference Freshman of the Year in 2000.

Wood also brings coaching experience at the high school level, serving as the pitching coach at Omaha Gross High School in the fall of 2003 and at state-qualifying Omaha Westside High School in 2004.

"We will strive for success both on and off the field by doing things the right way, putting in hard work, and competing to be better every day," added Wood. "I look forward to the opportunity to recruit tremendous student-athletes to such a prestigious university, represent Creighton University, and compete for a championship in the BIG EAST Conference."