Gov. Kristi Noem silent on possible appeal to ethics board 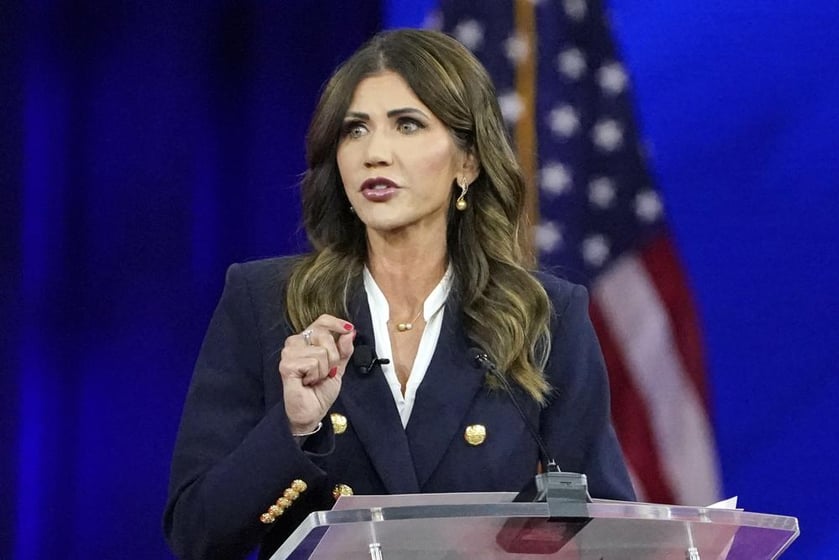 The Government Accountability Board voted unanimously last month that there was enough evidence to believe the Republican governor had committed malfeasance and engaged in a conflict of interest.

Noem has maintained she did nothing wrong, but so far the process has been conducted in private. Neither her office nor her reelection campaign answered questions Friday on whether she would proceed to a contested case hearing that would give her a chance to make her case publicly.

The board took unspecified “action” against the governor, and board member Gene Kean said last month that Friday would be the deadline for Noem to respond.

If there is no public hearing, it’s not clear whether the board will release details of the action it took. The board closed the complaint last month but suggested it could be reopened.

A lawyer who has represented the governor before the board also did not respond to questions.

The Associated Press first reported that shortly after a state agency moved in July 2020 to deny Noem’s daughter, Kassidy Peters, an appraiser license, the governor held a meeting with Peters and key decision-makers in her licensure. Days after the meeting, Peters signed an agreement that gave her another opportunity to meet the licensing requirements. The South Dakota Legislature’s audit committee, controlled by Republicans, unanimously approved a report in May that found Noem’s daughter got preferential treatment.

Noem previously requested the ethics complaint be dismissed without a hearing by arguing that the person who brought it, former Republican Attorney General Jason Ravnsborg, was out for revenge after she successfully pushed for his impeachment and removal from office for his conduct in a 2020 fatal car crash.

In that April motion to the board, Noem’s attorneys also said she could counter the accusations against her. Her campaign spokesman, Ian Fury, on Friday referred a reporter to an August statement that branded the board’s action as “illegal.”

But declining to fight the evidence in a contested case hearing would allow the board’s “action” against her while potentially avoiding further public scrutiny.

The Government Accountability Board, which has never handled such a high-profile case since its inception in 2017, has not publicly said what action it has taken. It has deliberated over the complaints for nearly a year in a series of closed-door meetings, navigating untested laws.

Board member David Gienapp, at the board’s August meeting, verbally moved to invoke a statute — SDCL 3-24-7 — that states the board “shall” hold a contested case hearing “to afford the accused person the opportunity to respond to the allegation.” But the board’s draft minutes, posted two days later, make no mention of that statute. Instead, the draft minutes state that the board acted to “make an initial determination” that the complaint “alleges facts” that the governor engaged in misconduct.

The board’s minutes state that it took “appropriate action,” but the board has kept that action a secret so far. The board is allowed under state law to issue a private reprimand. But the statute says it may take that action at the conclusion of a contested case hearing and after it has determined, by a majority vote, that there has been misconduct.

“Their official actions, whatever they may be, should be a public record,” said David Bordewyk, who directs the South Dakota Newspaper Association and advocates for open records and meeting laws.

“Given the nature of this board, which is to hold public officials accountable, the public has a right to know what those accountability measures are, regardless of the official.”

Board members this week either declined to comment or did not return a request for comment. An attorney hired by the board, Mark Haigh, has previously said it “fully complied” with all the requirements in the laws governing it.