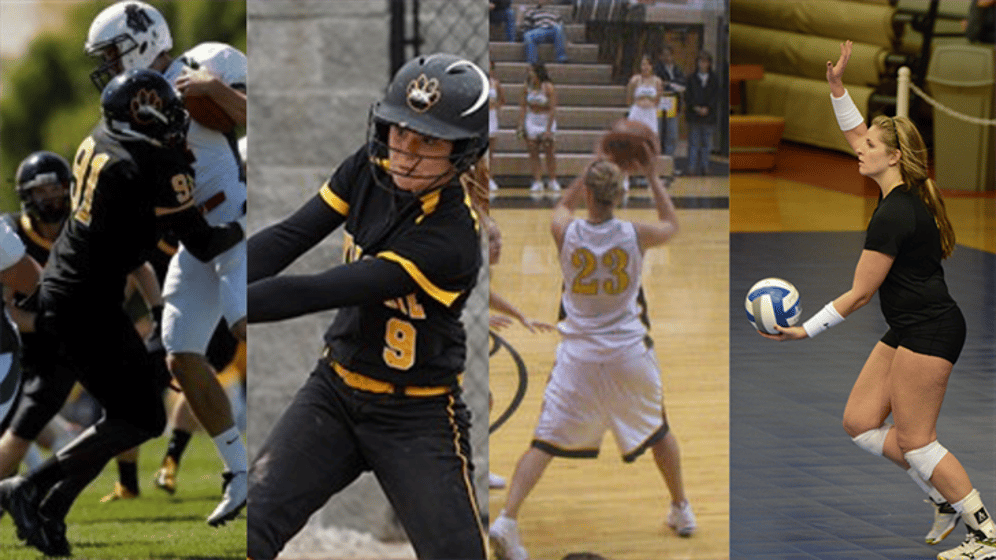 Wayne, Neb. -- A new class of Hall-of-Famers will be inducted at Wayne State next month.

Daniel turned into one of Wayne State’s top defensive ends ever during his career at WSC from 2008-12.  Daniel was a three-time First Team All-NSIC South Division selection as a sophomore, junior and senior and was a steady performer on the Wildcat defense

As a senior, Daniel was named NSIC Defensive Player of the Year with 59 tackles ranking fourth in the NSIC in sacks (eight) and fifth in tackles for loss (14.5-65 yards).  He also received the NSIC Glen Galligan Award at end of season given to a student athlete who makes positive contribution on and off the field.  Daniel currently ranks fifth in all-time sacks at Wayne State with 27.

Loos Lenihan was a four-year starting center fielder for the Wildcat softball team from 2013-16.  The Millard North graduate posted two of the best individual seasons ever by a Wildcat softball player as a junior and senior.

Lenihan hit .467 again in her senior season in 2016 and was named NSIC Player of the Year, First Team All-NSIC, First Team All-Central Region and NFCA All-American Second Team while also being named CoSIDA Academic All-American First Team.  Loos Lenihan had 92 hits, a school-record 58 runs scored and reached base safely in 52 of 53 games.  She was one of 25 finalists for NFCA Division II National Player of the Year as a senior.

Lenihan finished her WSC career first in runs scored (158), third in hits (250), fifth in stolen bases (46), seventh in total bases (297) and at bats (622).  She was a two-time All-American, First Team All-NSIC and All-Central Region and Academic All-American during senior season.

Hughes Morris was a standout full-rotation volleyball player at Wayne State College from 2012-15.  The Seward graduate was a four year starter and is one of just seven players in school history to record 1,000 career kills and 1,000 career digs, ranking third in all-time digs (1,924) and 15th in kills at 1,177.

As a senior in 2015, she was First Team All-NSIC after recording 20 double-doubles and averaging 3.57 kills and 4.74 digs per set (4th-NSIC) while helping WSC to a 28-8 record and the NCAA national semi-finals.  Hughes was a Second Team All-NSIC selection as a junior after posting another 20 double-doubles while averaging 3.52 kills and 4.04 digs a set.  She finished her four year career averaging 4.17 digs per set as a full-rotation player.

Following a standout playing career, Hughes Morris now serves as a coaching assistant on the Wildcat volleyball team (sixth season) and in 2021 was honored by the AVCA with the Thirty Under 30 Beach Coaching Award presented to up-and-coming beach coaching talent at all levels of the sport.

Gruntorad Wagner played two seasons at Wayne State (2004-05/2005-06) after transferring in from Nebraska-Kearney.

The Kearney native was a First Team All-NSIC selection both seasons at Wayne State and was named the NSIC Player of the Year as a senior in 2005-06, helping WSC to a 27-4 record and the schools’ first-ever trip to the NCAA Division II National Tournament.

As a senior in 2005-06, Gruntorad was First Team All-NSIC, NSIC Player of the Year and Most Valuable Player of the NSIC Red Baron Basketball Classic hosted by WSC by leading the Wildcats to the NSIC regular season and post season tournament titles with a 27-4 record and the schools’ first-ever trip to the NCAA North Central Regional in Grand Forks, North Dakota.

The 2010 Wayne State College volleyball team finished 26-4 overall and was 17-3 in the NSIC, advancing to the NCAA Division II National Tournament.

The team started the year with 16 straight wins, a new school record that broke the previous win streak of 15 consecutive wins set the year before.  The 2010 Wildcats were the first team in school history to achieve a #1 national ranking in NCAA and they were ranked #1 twice during the season.

#2 WSC beat #1 Minn. Duluth on October 1, 2010 and was ranked #1 on October 4 of that season.  Following a road loss at #16 Minnesota State, the Wildcats battled back and became #1 in the nation again three weeks later and battled co-#1 Concordia-St. Paul in Rice Auditorium in a match that attracted 1,153 fans to rank 10th on the single match attendance list.

The 2010 team also set the single match attendance record beating UNK before a school record crowd of 1,536 and ranked fifth in NCAA Div. II in home attendance that season.

Five players from the team were named to the All-NSIC Team – Jennifer Hefner and Diedra Artz (1st Team) Leigh Connot was NSIC Libero of the Year with Tali Fredrickson and Mindy Moody honorable mention.  Hefner was Academic All-District and was a repeat ESPN the Magazine First Team Academic All-American in the 2010 season.

Reggie and Marilyn Yates are lifelong supporters of Wayne State College.  Both graduated from Wayne State with physical education degrees in 1971. Reggie was a three year letter winner on the Wildcat football team from 1969-71 and was a member of the 1970 Mineral Water Bowl team and served as a tri-captain during his senior season while leading the team in receiving.

After moving back to Wayne in 1996, Reggie and Marilyn became trustees of the Wayne State Foundation and throughout their time as trustees Reggie served on the Executive Committee and Audit and Finance Committee.

Reggie was employed by Edward Jones Investments, serving in offices at Castle Rock, Colorado and Wayne until his retirement in 2013.  Marilyn served as a fitness instructor at WSC starting in 1997 and finished out her career as compliance coordinator until her retirement in 2010.

The Yates were WSC Cat Club members for many years as well as contributing to numerous Wildcat programs and projects.  Reggie also served on the Omaha Wildcat Golf Tournament board for numerous years.

Tickets are currently available to the Hall of Fame banquet.