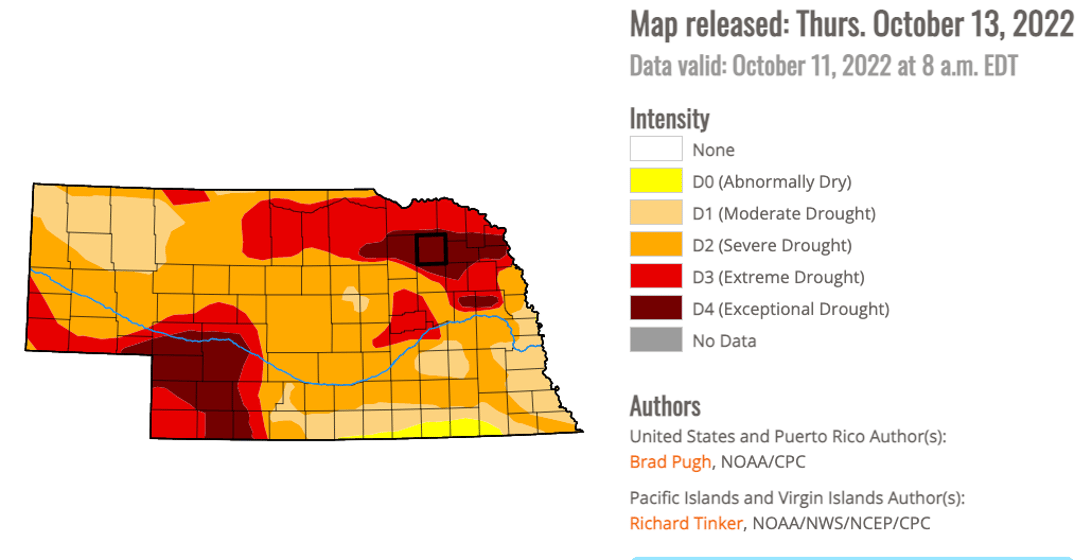 On Thursday, the Lower Elkhorn Natural Resources District (LENRD) met for their subcommittee meeting. While no actions were taken, an update was given on the district's drought conditions.

According to the US drought monitor, much of northeast Nebraska remained in a D3-D4 level drought. Because of these ongoing conditions, the Ad Hoc drought response committee presented two proposed action items.

Under the drafted action items, wells in a D3-D4 drought area would have a 14-inch per acre allocation. Meanwhile public and municipal water supply wells would have 250 million gallons per day/capita. Should regions facing these conditions be downgraded to a D2 level for two consecutive weeks, restrictions would be lifted.

"What we boiled down to is if we came down to a D2 for two consecutive readings then...our allocation of fourteen inches would be dropped," Chad Korth said. "It'd take five inches above average, estimated, of rainfall to be able to get down to that point.

Not all board members were in agreement with this proposal. Scott Clausen said they should be regulating what the city's water usage should look like, and should instead focus on the farmers.

Korth disagreed, saying the proposal has restrictions on the city so everyone in the region had a stake in water usage.

Another suggestion made Thursday was to take into account what kind of soils were in the region. Brothers Aaron and Ryan Zimmerman say the 14-inch allocation was too little for fields that used sandy or clay soils.

Because this was a subcommittee meeting, no action was taken. More information is expected to be made at the LENRD's next meeting on October 27.