Kansas suspends Self for 4 games in ongoing infractions case

Kansas suspended Hall of Fame coach Bill Self and top assistant Kurtis Townsend for the first four games of the season, along with imposing several recruiting restrictions, part of the fallout from a lengthy FBI investigation.
Wednesday, November 2nd 2022, 11:59 AM CDT
By Associated Press 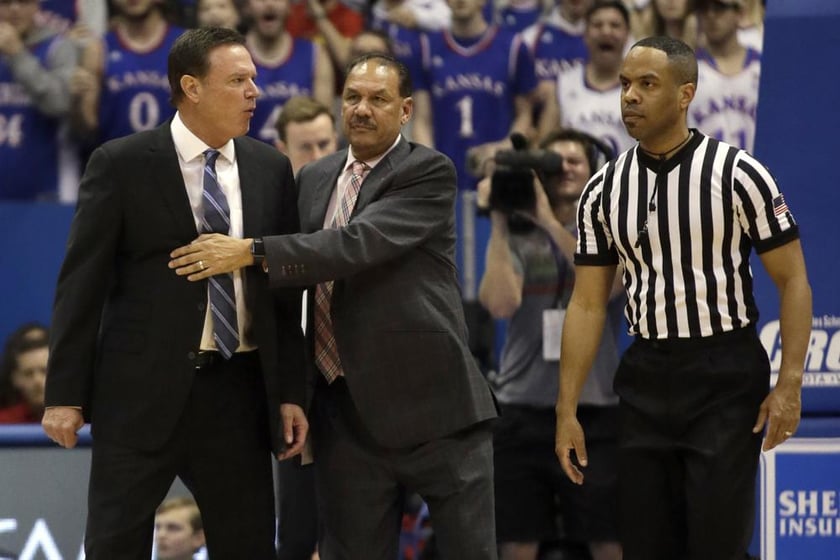 Kansas head coach Bill Self, left, is held by assistant coach Kurtis Townsend after being called for a technical foul by referee Marques Pettigrew, right, during the first half of a NCAA college basketball game against Louisiana Lafayette in Lawrence, Ka.
Courtesy: AP Photo/Orlin Wagner, File

LAWRENCE, Kan. (AP) — Kansas suspended Hall of Fame coach Bill Self and top assistant Kurtis Townsend for the first four games of the season Wednesday, along with imposing several recruiting restrictions, as part of the fallout from a lengthy FBI investigation into college basketball corruption.

Norm Roberts will be the acting coach for the defending national champions beginning with their opener Monday night against Omaha. Self and Townsend also will miss games against North Dakota State and Southern Utah along with a high-profile showdown between the No. 5 Jayhawks and No. 7 Duke in the Champions Classic.

Self and Townsend will rejoin the team to face North Carolina State at the Battle 4 Atlantis in the Bahamas on Nov. 23.

There were no official visitors this year for Late Night at the Phog, the annual celebration to kick off the season.

“Coach Townsend and I accept and support KU’s decision,” Self said in a statement. “We are in good hands with Coach Roberts, and I am confident that he will do a great job on the bench leading our team. I am proud of the way our guys have handled this situation and I look forward to returning to the bench for our game against N.C. State.”

The infractions case against Kansas stems from a federal investigation in 2017 that led to the conviction of shoe company executives, a middleman who worked with them and several assistant coaches.

Kansas was among the schools named in the case, along with Arizona, LSU, Louisville and N.C. State.

The Kansas case hinged on whether representatives of apparel company Adidas were considered boosters — the school contends they were not — when two of them arranged payments to prospective recruits. The school never disputed that the payments were made, only that it had any knowledge that the inducements were happening.

Auburn received four years of probation through a traditional NCAA infractions process for a similar case, but Kansas joined other schools in appealing its case to an Independent Accountability Review Panel, which was among the proposals made by former Secretary of State Condoleezza Rice in 2018 to reform the sport.

The panel works outside the purview of the NCAA and was designed to handle particularly complex cases. But its work has been painfully slow — NCAA president Mark Emmert acknowledged the process takes “way too long” — and Kansas decided to self-impose restrictions while continuing to wait for the IARP to announce its decision.

“We are hopeful these difficult self-imposed sanctions will assist in bringing the case to a conclusion,” Kansas athletic director Travis Goff said in a statement, and declining any additional comment. “Until then, we will continue to focus on supporting our outstanding men’s basketball student-athletes and coaches.”

Kansas had already doubled down on Self by signing him to a new contract in April 2021.

Under the terms of the five-year deal, Self gets one additional year after the conclusion of each season — in effect, making it a lifetime contract. It guaranteed him $5.41 million per year with a base salary of $225,000, a professional services contract of $2.75 million and an annual $2.435 million retention bonus.

The contract includes a clause that states the school cannot fire Self for cause “due to any current infractions matter that involves conduct that occurred on or prior to” the signing of the deal. And while he would have to forfeit half of his base salary and professional services pay while serving any Big 12 or NCAA suspension, it’s unclear whether that includes any self-imposed suspensions such as the one handed down Wednesday.

“Throughout this process, we have had ongoing conversations with all the involved parties,” Kansas chancellor Douglas A. Girod said in a statement. “We believe the actions we are announcing today move us closer to resolving this matter.”

Making the Kansas case more complex, though, is the rapidly shifting landscape of college sports. Some of the alleged infractions from the 2017 investigation would no longer be against the rules following name, image and likeness legislation, which has allowed athletes in all sports to begin making money from endorsements and other off-the-field business arrangements.

Meanwhile, the days of postseason bans and crippling scholarship reductions as punishments appear to be ending.

Memphis was placed on three years of probation in August and slapped with a public reprimand and fine for violations in the recruitment of James Wiseman, now with the Golden State Warriors. But the Tigers escaped any scholarship penalties or postseason bans because the IARP said it did not want to punish current athletes.

Even as the IARP continues to work on several cases, the NCAA’s Division I Transformation Committee earlier this year put forth a recommendation to end the process. The proposal was swiftly adopted by the Division I Board of Directors.

“We look forward to commenting further when this process is fully resolved,” Girod said of the IARP process. “Until then, I want to reiterate our unwavering support of Coach Self and our men’s basketball program.”