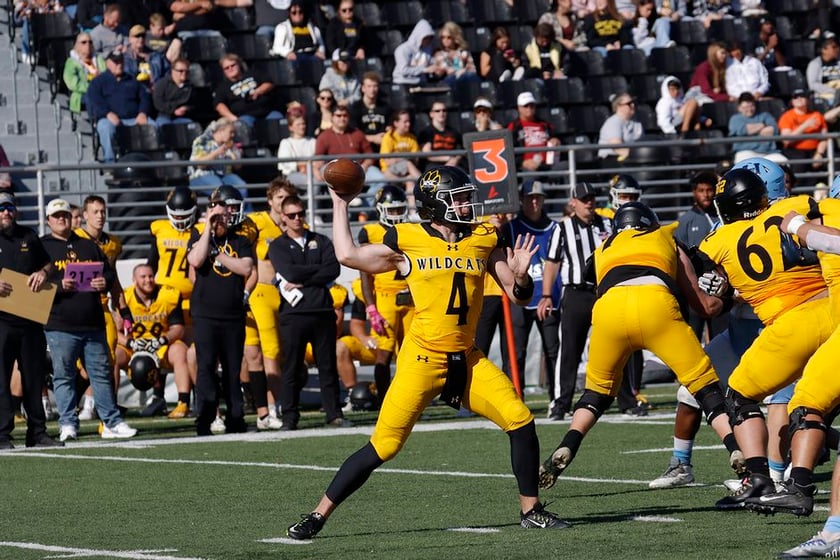 WAYNE, Neb. -- Wayne State College quarterback Nick Bohn is among 48 football players to be nominated for the 2022 Harlon Hill Trophy as the Division II College Football Player of the Year.

A sophomore from Bennington, Bohn accounted for nearly 3,000 yards of total offense in 2022. He completed 162 of 273 passes for 2,246 yards with 19 touchdowns and six interceptions. He rushed for 725 yards and seven touchdowns.

Bohn is one of just seven sophomores to be nominated for the award.

Wayne State finished the season with a 9-3 mark, just the fourth time the Wildcats won nine games in a season. The Wildcats earned their second ever NCAA Division II playoff berth while also claiming the school's first NSIC football championship.

The group of 48 candidates includes 16 quarterbacks, 10 wide receivers, eight running backs, seven defensive linemen, six linebackers and one punter/kicker. In addition to the list's seven sophomores, the nominees include 35 seniors and six juniors.

The sports information directors at the 164 NCAA Division II football-playing institutions nominate and vote on the award. The 48 initial candidates will be placed on regional ballots and the top two players from each of the four NCAA regions will advance to the national ballot when regional voting concludes on Monday, Nov. 28.

The winner of the 2022 award will be announced on Friday, Dec. 16 and the winner will be honored at the Little Rock Touchdown Club awards banquet on Friday, Jan. 13, 2023.

The Harlon Hill Trophy is named for the late Harlon Hill - the former University of North Alabama standout - who excelled with the Lions from 1950-53 before going on to fame in the National Football League with the Chicago Bears.