Creighton volleyball bounced in opening round of NCAA Tourney 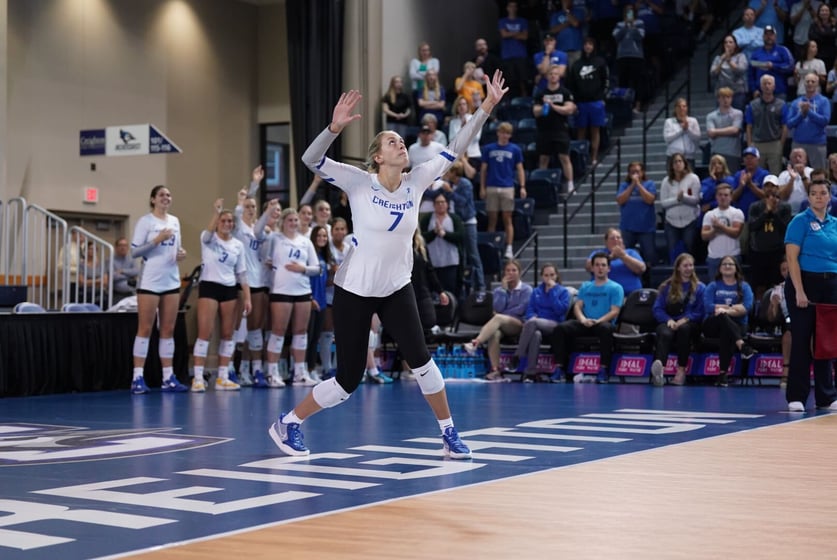 OMAHA, Neb. -- The 14th-ranked and 13th seeded Creighton Volleyball team had its season come to an abrupt end in the First Round of the 2022 NCAA Tournament, falling 3-2 to Auburn in front of a D.J. SokolArena record crowd of 2,653.

The Bluejays played without All-American setter Kendra Wait, who was injured and missed the first match of her career after 66 straight starts.

Sophomore Norah Sis led all players with a match-high 30 kills, setting Creighton's program record for kills in a single NCAA Tournament match. Sis also picked up 13 digs, recording her 13th double-double of the season. Freshman Ava Martin added 14 kills of her own, while graduate transfer Jazz Schmidt closed the book of her storied college career with her first double-double of the season, dishing out 44 assists and collecting 11 digs. Graduate transfer Allison Whitten dug a match-high 20 balls on the back row for the Bluejays. Creighton finished the night with 62 kills, seven aces, six blocks and hit .166.

Madison Scheer paced the Tigers with 17 kills, while Akasha Anderson and Bel Zimmerman added 15 and 11 kills respectfully. Jackie Barrett closed out the night with a double-double passing out 44 assists and digging 10 balls. Sarah Morton collected 19 digs while also serving up a pair of ace serves. As a team, Auburn had 57 kills, 14 blocks, four aces and hit .231.

In a back-and-forth first set that saw eight ties and three lead changes, the Bluejays used a late 6-1 run to open up a 20-15 lead on the way to a 25-21 set win. Creighton fell behind early as Auburn scored four of the first five points of the match off a pair of kills from Anderson and a stuff block from Kendal Kemp and Zimmerman. The Bluejays responded with a 4-0 run of their own, behind kills from Sis and Martin as well as a pair of blocks from Schmidt and Schmitt to take a 5-4 lead. The Tigers regained the lead and took a 11-9 advantage with a 5-1 burst of their own before Creighton battled back to take a 14-13 lead on an Auburn service error. The Bluejay would not trail again as a 6-1 spurt, highlighted by a kill from KeeleyDavis that gave Creighton a 20-15 advantage. Sis and Martin led the Bluejays with three kills each in the opening frame.

The second set featured 10 ties and four lead changes as the two squads went round-for-round with one another before Auburn pulled away for a 25-21 set win to even the match up at 1-1. CU held an early lead of 11-9 after back-to-back ace serves from Kiara Reinhardt before Auburn embarked on a 5-1 run to regain the lead at 14-12. Creighton would close to within one at 20-19 on a kill from Schmitt but Auburn regrouped and scored five of the last seven points to grab set two 25-21.

The Bluejays built an early in set three as Sis blasted home three of her 13 kills in the set to give Creighton a 3-0 lead. After holding a 6-4 advantage, Auburn rattled off six straight points to take a 10-6 advantage and force a Creighton timeout. CU would regroup and use kills from Sis, Schmitt and Martin to even the set at 14-14. The Tigers, however, would respond with kills from Kemp and Chelsey Harmon, as well as a block from Kemp and  Barrett to take a 19-16 lead. Creighton closed the deficit to within one at 19-18 on a kill from Sis but Auburn closed out set three by scoring five of the last seven points again to claim a 25-20 victory and take a 2-1 lead in the match.

In set four, the Bluejays steadily built leads of 7-2 and 14-7 on kills from Sis. Auburn would cut the lead down to five at 14-9 on a kill by Zimmerman, but a stuff block by freshman Ann Marie Remmes and Schmitt and the 25th kill of the match by Sis pushed the Bluejays lead back out to 18-10. Creighton would cruise the rest of the way, capturing a 25-16 set win, forcing a decisive fifth set.

Set five saw Auburn use a pair of kills from Akasha and a Bluejay attack error to take an early 3-1 lead. CU regrouped and scored four of the next five points behind a pair of kills from Sis to take a 5-4 lead but Auburn answered with a 6-1 run of its own, pushing the advantage out to 10-6 and forcing a Creighton timeout. Out of the break, Creighton got kills from Martin and Remmes to cut the deficit to 10-8. Auburn would hold at least a two point lead the rest of the way as the Tigers claimed the match with a 15-11 fifth set win to advance to the Second Round of the NCAA Tournament.