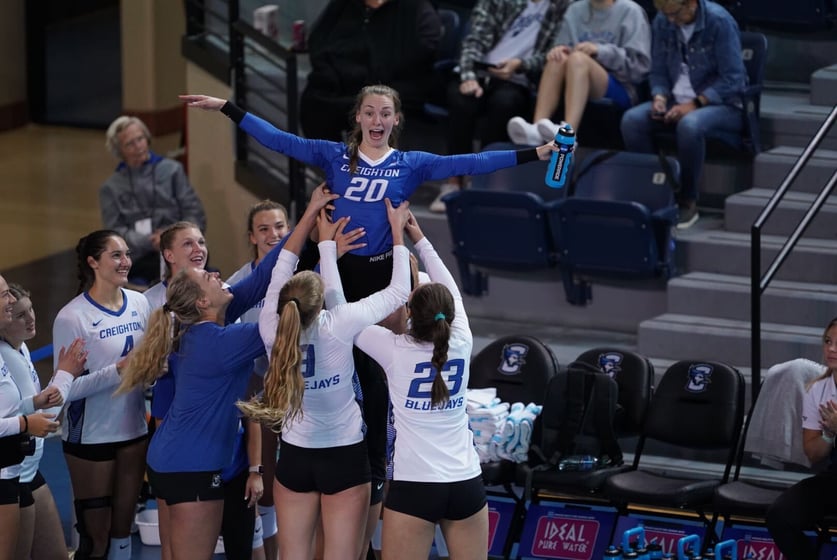 OMAHA, Neb. – No. 17 Creighton volleyball closed out the Bluejay Invitational Presented by Hilton Omaha with a 3-0 sweep of Northern Iowa on Saturday night inside D.J. Sokol Arena.

With the win the Bluejays moved to 5-1 on the season, while Northern Iowa dropped to 1-5 overall.

Northern Iowa was led by 11 kills from Emily Holterhaus. Inga Rotto and Carly Spies added eight kills apiece as Sydney Petersen had a match-high 16 digs. The Panthers closed out the match with 33 kills, five aces, two blocks and 47 digs on .152 hitting.

Creighton wasted no time building an early advantage, surging out to an 8-4 lead on a service ace by Wait. The lead grew to 14-6 on back-to-back aces from Whitten. UNI would use a 6-1 run to close the deficit to 15-12 before a trio of kills from Sis and Schmitt pushed the lead back out to 19-12. The Panthers once against closed to within three at 19-16 on a pair of kills from Holterhaus, but Creighton responded with a 5-0 run on  Bolton's serve before Wait closed out the set with a kill. In all, Creighton had seven service aces and 10 kills in the opening frame.

Down 4-1 early in the third frame, the Bluejays used slams from Schmitt and Sis as well as a pair of blocks to knot things up at 6-all. A 5-0 serving surge by Davis that featured kills from freshman Ave Martin and Sis gave the Bluejays their first lead at 12-7. The Bluejays would not trail again, extending their lead out to 17-10 on a double-stuff block by Davis and Schmitt forcing a Panther timeout. The Bluejays lead would grow to 22-12 before UNI used a 6-0 burst to close to with four at 22-18. Another set of kills from Davis and Schmitt closed out the match and gave the Bluejays a 25-21 set win and 3-0 sweep.

Creighton returns to action on Wednesday, Sept. 7, when it hosts No. 2 Nebraska in a 5 p.m. match that will be televised nationally on FS1 at CHI Health Center Omaha.

Both Davis and Wait earned a spot on the All-Tournament Team for the Bluejays. Led by Bluejay Invitational MVP Reagan Rutherford, No. 16 Kentucky won the round-robin tournament for the first time in the eight years its been hosted. The Wildcats dropped just one set in three matches en route to the title.