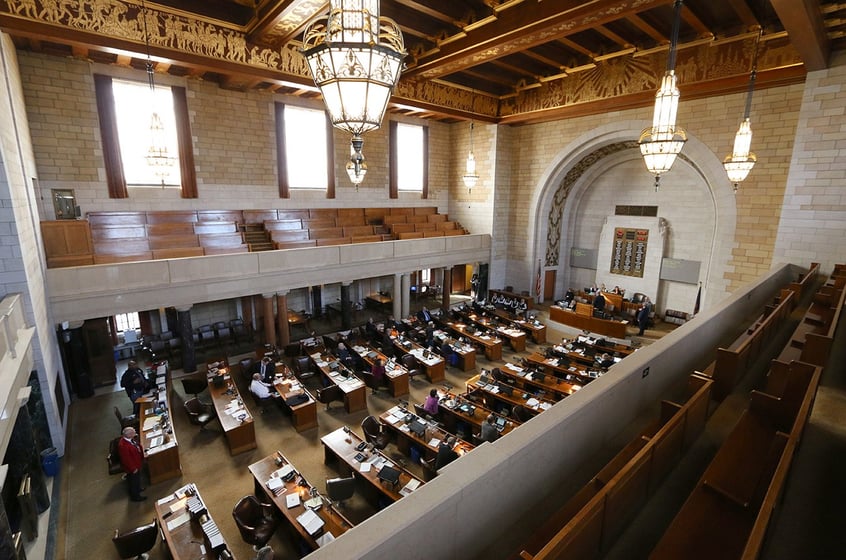 LINCOLN — It appears that if vote totals hold in a couple of close races, Republicans captured a filibuster-proof majority in the officially nonpartisan Nebraska Legislature in Tuesday’s election.

In another critical race, Democrat George Dungan III, a public defender, was narrowly defeating — by 61 votes — a Republican opponent, attorney Russ Barger, in a northwest Lincoln district that had long been represented by Democrats.

If late vote counts don’t change the results, the GOP would gain one seat, obtaining a 33-vote supermajority in the Unicameral Legislature.

That could give Republicans the power to pass several conservative initiatives that had been blocked by filibusters in the past. Those include bills to ban or further restrict abortion, allow carrying of concealed weapons without a state permit or training, and provide a state tax break for contributions to private schools.

A change in the balance of power could also force changes in legislative rules long sought by Republicans, including making votes for committee leadership positions public instead of by secret ballot.

This year’s legislative elections were marked by a high number of hotly contested races and record spending, with several candidates spending more than $100,000 for a post that pays $12,000 a year.

Twenty-five seats in the Legislature were up for election, and at least 11 of them — about double the normal number — were featuring tight races.

Among the results in hotly contested races:

In central Omaha, attorney Stu Dornan, a Republican, took a late, 122-vote lead over realtor John Frederickson, a Democrat, to replace McCollister in District 20. McCollister, an independent Republican, sometimes voted with Democrats in the Legislature. Some view Dornan, a former Douglas County attorney, as having the same independent streak.

Former State Sen. Merv Riepe recaptured his old seat in District 12 in the Ralston/Millard area and flipped the seat being vacated by Lathrop, a leading Democrat who opted against a re-election bid. Riepe defeated Robin Richards, a fellow member of the Ralston School Board.

In north-central Lincoln’s District 46, a former state senator, Danielle Conrad, reclaimed her seat in a race against a fellow Democrat, James Michael Bowers, a social worker.

Two recent appointees by Gov. Pete Ricketts held onto their seats in their first election bids.

In the Millard area, Kathleen Kauth, a Republican businesswoman appointed in District 31 following the death of Sen. Rich Pahls, defeated her Democratic opponent, teacher Tim Royers. Royers had run a close second to Pahls in 2020, and some saw this race as a possible pickup for the Democrats.

Teresa Ibach of Sumner was uncontested for an open seat left by the term-limiting of Sen. Dan Hughes of Venango.

In the contest to replace Gering Sen. John Stinner, Don Lease of Bridgeport was leading Brian Hardin of Gering in early results.